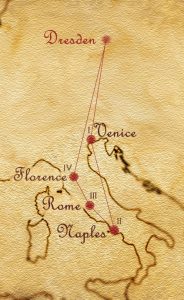 Works by Vivaldi, Montanari, Albinoni, Pisendel,  and other Italian masters.

The young virtuoso Johann Georg Pisendel returned to Germany after almost one year travelling across Italy. Pisendel, who was to become one of the most renowned musicians in Europe, arrived in Dresden later that year to take the position of Premier Violon in the Dresden Hofkapelle. During his Italian sojourn he earned the respect and friendship of the most important musicians of the time, including Vivaldi, Montanari, and Albinoni. Pisendel brought with him not only the teachings of these great virtuosos but also a luggage full of musical manuscripts, selecting for the return trip the most valuable scores that he could gather. It was a baggage full of musical treasures, some of them performed for the last time 300 years ago.

This program begins with THE CABINET II PROJECT: a deep exploration into the Schrank II (Cabinet II) in Dresden, which contains Pisendel’s collection, one of the most important archives of 18th century music compiled exactly 300 years ago.

Johann Georg Pisendel was one of the most renowned virtuosos of his time, he was not only known as an outstanding composer and violinist, but his talent and personality earned him the friendship and admiration of the greatest composers of his time. Friend of Bach, Vivaldi, Telemann, Albinoni, and many others, Pisendel received from the hands of these composers pages and pages of scores written especially for him: the violin solo in the B minor Mass by Bach, sonatas and concertos by Vivaldi and Telemann are just a few examples.

Pisendel was also an avid collector and a laborious copyist. His personal collection of scores is kept in the archive known as Schrank II (cabinet II) in reference to its original position in the archive of the Dresden Orchestra. Since 1717 Pisendel was filling this collection not only with the scores that were played in the orchestra but also with all music that he personally believed as most valuable and that he had gathered on his travels.

Out of all these trips, his journey to Italy was a milestone that would mark a before and after not only in his life but in the musical fate of all Dresden, one of the most influential musical centers of Europe. Since then, Dresden changed its strong French musical taste (implanted by former concertmaster, Jean-Baptiste Volumier) for a distinctly Italian taste that influenced generations of musicians.

Pisendel was already part of the orchestra of Dresden in 1712. It was in 1716 when Prince Elector of Saxony, later known as Augustus III of Poland, began his ritual training trip to Italy, bringing with him a selection of musicians from his orchestra, Pisendel among them. Pisendel used the trip to take lessons from the great Italian masters and to satisfy his musical curiosity. When in September 1717 he returned to Dresden his luggage was packed with scores, many copied by himself in a special, smaller paper that saved room for the trip, other scores were written by masters themselves such as Vivaldi or Albinoni. After that journey Dresden was never the same, the Italian taste seized composers like Graun and Quantz and the binomial Dresden-Vivaldi became inseparable, making Dresden one of the largest archives in the world of Vivaldi’s music, surpassed only by Turin’s one.

In words of the famous musicologist Michael Talbot:

“The story of the journey of Pisendel to Italy is a story that deserves and has yet to be told.”

The Sonata RV 25 by Antonio Lucio Vivaldi is not only a work that demonstrates the originality and quality of one of the greatest composers of the Baroque, but is also a valuable evidence of the special bond that was created between the Venetian master and the young Pisendel. It was Vivaldi himself who copied and dedicated the sonata to Pisendel, in his own handwriting he titled: “Suonata à Solo fatto p[er] Ma[estr]: Pisendel Del Vivaldi” (Sonata made for the master Pisendel by Vivaldi). But Vivaldi did not complete the sonata and left room for Pisendel to add a movement of his own creation, Thereby, we find,  between the notes written by Vivaldi, a slow movement written in a different hand, that of Pisendel. The musical piece is a perfect example of the close relationship that was created between the two virtuosos.

It was during his stay in Venice when Pisendel met another of the great composers of the moment: Tomaso Albinoni, who also was captivated by the German’s skills. As result of this admiration we found in Pisendel’s luggage of three autographed Albinoni Sonatas. The Sonata in B flat Major includes a special dedication to Pisendel:  “Sonata a Violino solo di me Tomaso Albinoni Composta p il Sig:  Pisendel”. The special technical and musical requirements of the Sonata clearly show that it was written especially for the virtuouso Pisendel.

The Sonata in E minor by Antonio Montanari was copied probably in Rome when Pisendel sought the advice of this great violinist and teacher of Vivaldi himself. Antonio Montanari was defined as “virtuossisimo sonator di violino” by the famous Pier Leone Ghezzi and one of the great composers of the time, Giuseppe Valentini, praised his “merito impareggiale” and confessed to being“ Suo diuoto Seruo ammiratore della Sua Virtu.”

Authenticated in 2005 as a piece by Pisendel, the Sonata in E major was written during his journey through Italy and is a perfect exponent of the personal and virtuoso compositional Pisendel’s style. It is very rarely performed, partly because of the relative novelty of the pisendelian paternity of the piece and in part by the difficulty of reading the manuscript, that contains lots of annotations and corrections. However these corrections add interest to the piece as recent studies suggest that were made by Antonio Montanari, making the composition a perfect example of musical experiences Pisendel in Italy. 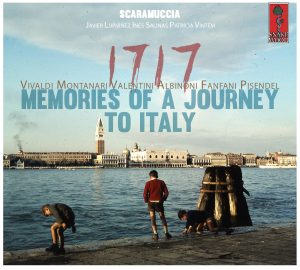