Antonio Lucio Vivaldi is arguably one of the best-known baroque composers. However, the rediscovery of the Prete Rosso in modern times took place quite recently. It is difficult to believe that Vivaldi was a total stranger to the general public until the late 1950s, and his music was restricted to a small academic circle. As a matter of fact, the history of the rediscovery of his music would make a thrilling film script and might still offer us some surprises.

Family inheritances with extravagant characters, economic and legal matters, the fascists in Italy, the Nazis in Germany, World War II and the bombings of Turin and Dresden; all of this seemed enough to consign Vivaldi’s music to the oblivion of dark drawers and archives. For some reason, it was in Germany and not in Italy where Vivaldi’s manuscripts were first studied, so the first 20th century editions of his music came from the Dresden archives. Curiously enough, the most recent discoveries have also taken place in Dresden, more precisely in the so-called Schrank II (“Cabinet II”), in reference to the original location of the collection) in Die Sächsische Landesbibliothek – Staats- und Universitätsbibliotek Dresden (SLUB).

The article by Miles Fish, Discovering the Rediscovery of Antonio Vivaldi,   “The Choral Journal” (May, 2015)  is highly recommended if you want to know more about the rediscovery of Vivaldi.

The music from the Schrank II is part of the compilation that was gathered by Johann Georg Pisendel over more than 40 years. Pisendel was the concertino of the orchestra of the Court of Dresden from 1728 (although his role in the orchestra had been significant since 1717) until his death in 1755. He is considered one of the great artists of his time, and amongst his famous friends, one is especially worth mentioning: Antonio Lucio Vivaldi.  Pisendel was not only Vivaldi’s pupil but also had a close friendship with him during his whole life. They met in 1717 when Pisendel travelled to Italy (although some facts may lead us to think that they could have met earlier).

When he went back to Dresden he took an enormous compilation of sheet music with him, all of them scores by the great Italian masters, predominantly by Vivaldi (copied in a smaller size of paper so as to save space on his journey, which the Germans call Reisepartitur – “travel scores”). From that moment on there has been a significant link between Vivaldi and Dresden, which is nowadays the second biggest archive for Vivaldi, only topped by Turin.

And it was in the Schrank II where the new music featured in this recording was discovered. 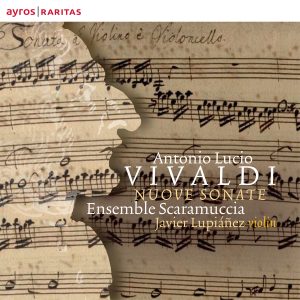 The story of these new discoveries started in 2013 during the preparation of a new programme for Scaramuccia: something original, with quality music but not widely performed: a programme about anonymous composers. And what place could be better to look through than the Schrank II, which is easily accessed and contains an impressive compilation of anonymous sonatas and some trio sonatas. Amongst them, we discovered that some of the pieces included ideas that were familiar to us and melodies we already knew.

While investigating the pieces of the Schrank II, I found out that the first movement of one of those anonymous sonatas was an almost literal version of the second movement of Vivaldi’s Violin Concerto RV 205. The programme of anonymous composers now included a possible Vivaldi. It was then that another anonymous piece struck me: a sonata for violin, cello and continuo. Although its material sounded highly familiar, I could not quite identify it: Corelli, Bonporti or Vivaldi. They were all there. We decided to play it for my professor at The Hague at the time, Enrico Gatti, one of the greatest specialists in Italian baroque music. He was the one to notice that the Gigue for solo cello from the anonymous trio sonata was almost identical to the gigue in Vivaldi’s Violin and Continuo Sonata RV 10. I had two possible works by Antonio Lucio Vivaldi in my hands, but they demanded further research, so it became my Master thesis in the Conservatoire of The Hague. Scaramuccia had the privilege to be the first group to perform these pieces and claim that they were composed by Vivaldi in a concert and an interview broadcast on the programme “De Musyck Kamer” of the Dutch radio station Concertzender, in summer 2014.